Warning: count(): Parameter must be an array or an object that implements Countable in /homepages/11/d135846085/htdocs/site/wp-content/themes/jollyany/includes/library/functions.php on line 738

Warning: count(): Parameter must be an array or an object that implements Countable in /homepages/11/d135846085/htdocs/site/wp-content/themes/jollyany/includes/library/functions.php on line 738
Average Rating 0
10. Januar 2021 322 Views

In 2002, Carlos Alcàcer and Conxita Vilarmau decided to make a reality to one of their dreams:
create a high quality winery in the DO Empordà. AV Cellar was born under the belief that the family
was building a project on a privileged territory to produce selected wines with personality and with
the highest quality. Carlos passed away in 2017 and his sons, Ferran (cellar manager) and Lluís
Alcàcer (vineyards manager) took over together with their wives Miriam Codina (Sales & Export
Manager) and Montse Sanahuja (Communication and Enoturism). Conxita is more than ever yet
the soul of the cellar delivering all its experience and knowledge to create unforgettable wines.
Located in the very heart of the Albera massif, close to the French border AV Bodeguers
ellaborates fruity modern wines based on the local mediterranian grape varieties such as black
grenache (locally known as lledoner), carignan (samso) and syrah for the reds and white grenache
and macabeu for the whites. The winery is located in the municipality of Vilamaniscle, less than 10
km from Llança where the Pyrenees start to become mountains. Vilamaniscle is a closed valley
sorrounded by a mountainous system of heights between 500-600 m. The celler owns a fabulous
view on the Gulf of Roses and there can be seen the gentle white snowed mountains during the
winter.
The vineyards, divided into five estates accounting for 9 ha are separated by less than 200 m each
but all of them awarded with different sun expositions, orientation and stepness delivering more
complexity on the wines produced. All the vineyards are in the municipalities of Vilamaniscle and
Rabós d’Empordà, within the massif of the Alberas. All the vines were replanted in 2002 but the
carignan vines which have been in the same place for more than 80 years. Those old carignan
vineyards were incorporated to the celler in 2015.
The celler is producing around 25.000 bottles of its wines:
• Petit Suneus Red. Blend of Grenache (50%), Carignan (30%) and Merlot (20%).
• Petit Suneus White. Blend of White Grenache and Macabeu (50-50).
• Suneus Red. Blend 80% Black Grenache and 20% Syrah. Aged during 6 months in french oak
barrels and at least 6 months in bottle.
• Suneus White. 100% white grenache aged on its lees during 2 months.
• Nereus Black Grenache. 100% Black Grenache from our different estates aged during 12
months in french oak barrels and 12 months in bottle.
• Nereus Selecció. Blend of Grenache, Syrah and Merlot aged during 12 months in french oak
barrels and 12 months in bottle.
• Elitia Old Carignan Vines. 100% carignan from old-vines (>80 years) aged during 12 months in
french oak barrels and 12 months in bottle.
This mountainous core is characterized by being a geological formation very close to the
Mediterranean sea with soils rich in slate mineral. The grapes that are obtained are strongly
characterized by the four elements of nature as follows:
– EARTH
Slimy ground, very poor in organic materials, with high drainage, which favors the formation
of plants with little vigor. Almost all the vines are planted in slate-mineral soils. The vines
are forced to develop very deep roots in their struggle to capture the water that escapes,
due to the great permeability of the terrain. This fight structures the wine while giving it
elegant mineral nuances.
– FIRE
The Mediterranean climate, where in addition, the rainfall is scarce, offers many sunny days.
The high insolation level favors maturation reaching optimum levels. Additonally the slate
mineral soils keep the warm during the day and liberate it during the night enabling a nicer
maturation.
– AIR
On the one hand, the Tramontana, strong north wind, reduces the presence of
microorganisms in the vineyards, allowing the vines to develop their vegetative growth in a
natural and organic way. On the other hand, the sea breeze that blows the summer
evenings, moderates the temperature, allowing the grape to reach a less accelerated
maturation. The wind is an essential component that enables the celler to have converted
its vineyards to organic.
– WATER
The situation of the estates
avoids extreme temperatures. In addition, the scarcity of this element in the medium greatly
affects the development of plants, which gives elegant sha
The vines have normally a very low yield with
All the vines are in conversion to organic wines certification (CCPAE). Vintages 2013, 2014, 2016
were in conversion. The first certified organic wine would be launc
Carlos & Conxita: the founders
Vilamanislce (Girona)
The names of the wines are also linked to the terroir and the surroundings were we grow our vines.
Nereus is the ancient greek god of the Mediterranian Sea and father of the Nereidas. 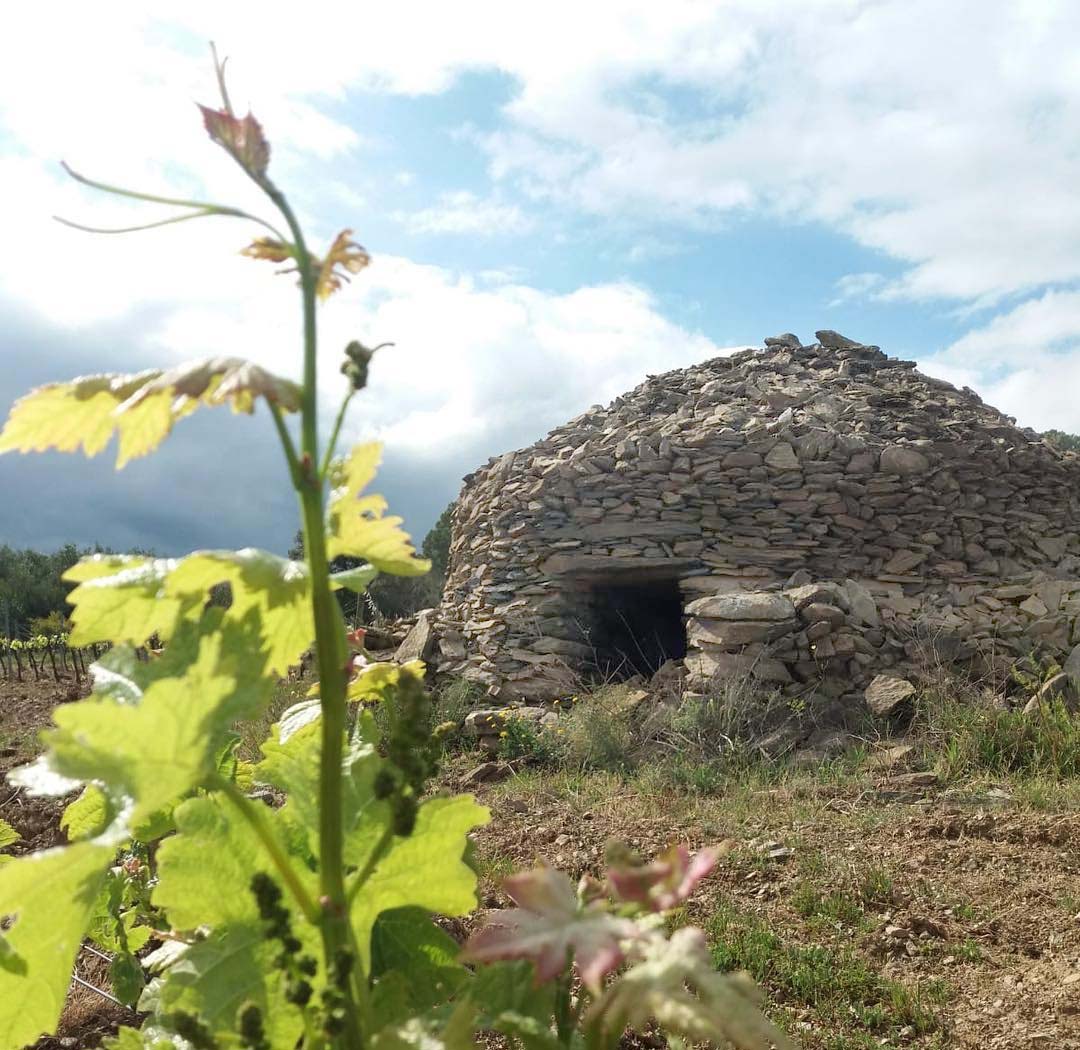 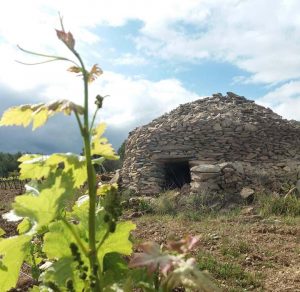 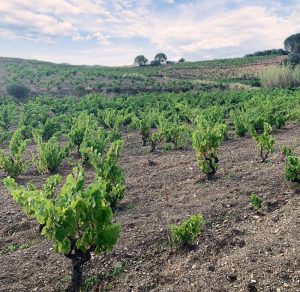 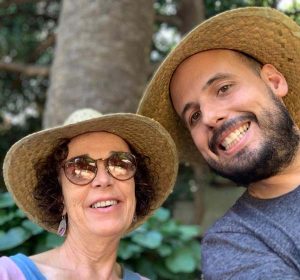 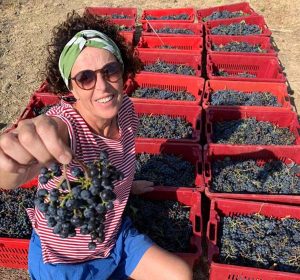 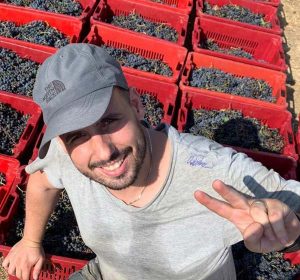 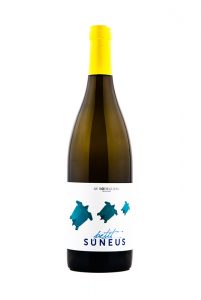 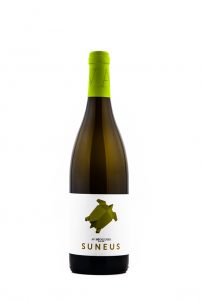 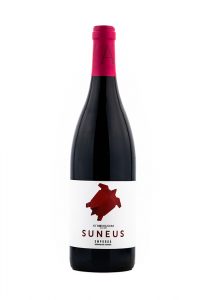 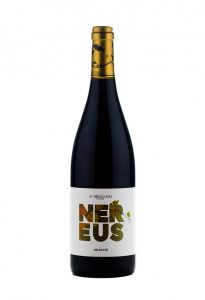 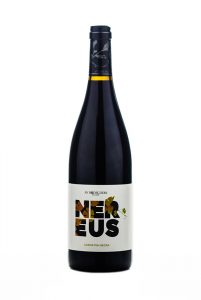 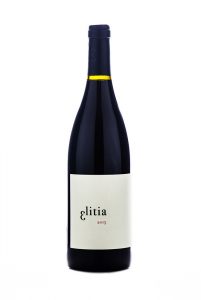